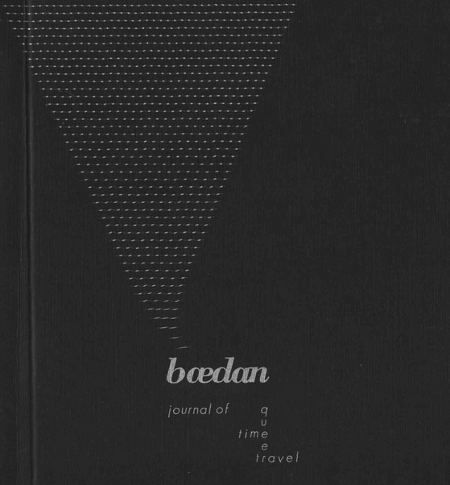 We are very pleased to announce the release of the second issue of the journal Bædan, as well as the free distribution of the first issue through the Anarchist Library.

In many ways, Bædan – a queer journal of heresy picks up where Bædan – journal of queer nihilism left off. Much remains invariant: the form, a general disposition toward hostility, and of course fiery gestures against Gender and Civilization (and all the theories, views of history, and identities which hold them together). Bædan – a queer journal of heresy, does however, take leave of the first by exploring new inquiries and critiques. In this issue we take aim at all manner of radical dogmas, ideologies, and sciences, while also exploring the the worlds of poetics, archetypes, and myth. The new issue is also an engagement with a constellation of recent anarchist endeavors to explore the hell we all inhabit. We remain obviously inspired by conversations within the anti-civilization and nihilist milieu, by recent developments in anarchist thought, by correspondence and critique, and by the actions and words of comrades who are imprisoned or remain at large.

If the first issue of Bædan was a knife thrust wildly in the dark, the second is an effort to examine our enemies in a new light; enemies who bear scars yet endure. In a sense, this issue follows through our initial attack and pushes beyond our own horrors at the consequences of words. We write at a time when everything which seemed slightly possible two years ago has borne its rotten fruit; when queer recuperation has become more powerful and accepted than ever, while the fetish for technology has reached an unprecedented frenzy; when so many efforts at subversion languish under the tyranny of cybernetic identity and aesthetics (even our own etymologies have become identities!); when friends turn away out of fear of the unknown, turn toward all the comforts and certainties of the past (identity politics, traditionalism, religious morality, activism, et al). The old enemies rear their heads and the terrain is as bleak as ever. And yet we take seriously that adage: “There’s no need to fear or hope, but only to look for new weapons.”

Bædan – a queer journal of heresy, over two hundred pages of original content including: a scathing critique of gender and domestication, an exploration of the poetry of Percy Shelley, a vindication of anality and the fecal decomposition of society, an experiment with anarchist rituals and nihilist archetypes, correspondence (friendly and otherwise), and a new translation of Guy Hocquenghem.

Bædan – a queer journal of heresy is available from Little Black Cart.

Bædan – journal of queer nihilism can be found online at The Anarchist Library.

Bædan – a queer journal of heresy is also on GoodReads.

If you are in Seattle or the Bay Area you can also contact us directly for copies:

[the name of the journal][at]riseup[dot]net

Bædan – journal of queer nihilism can be purchased from Little Black Cart for $12.

Friendly and inimical reviews of Bædan – journal of queer nihilism are hosted by GoodReads.

The full text of Bædan – journal of queer nihilism is available for reading through The Anarchist Library.